On Wednesday, the Equal Employment Opportunity Commission released its charge-filing statistics for fiscal year 2018, which ran from October 1, 2017, through September 30, 2018.

According to Law360, EEOC charges in FY 2018 were at their lowest level since 2006. Yes, 2006. When George W. Bush was President of the United States. Before the Americans with Disabilities Act was amended. Long before #MeToo. The year that my 31-year-old graduated from high school. *sniffle*

All of which is wonderful news for employers, but the news wasn’t completely good. Sexual harassment charges increased by 13.6 percent compared with FY 2017, and the monetary relief obtained by the EEOC in sexual harassment charges increased by more than 20 percent. I have a theory about that and a prediction, which I’ll save until the end of this post.

All of the EEOC’s statistics, dating back to 1998, are available here.

Nationwide, the EEOC received 76,418 charges, and resolved 90,558 charges (the latter figure would include charges from prior fiscal years). The agency obtained $505 million for victims and reduced its “workload” (should that be “backlog”?) by 19.5 percent.

In years past, retaliation has been the most common charge, followed by race, with sex and disability (post-ADA amendments) not far behind. This year, retaliation stayed in the lead, but race charges declined significantly, dropping into fourth place. That put sex discrimination charges (all types, including sexual harassment and LGBT discrimination) in second place, and ADA charges third. But the numbers for sex, disability, and race were very close.

The numbers for the other types of charges were about what we’ve come to expect over the years. The “Big Four” were followed by age, national origin, color, religion, and Equal Pay Act, in that order. Genetic discrimination charges brought up the rear, with a mere 220 charges filed nationwide. 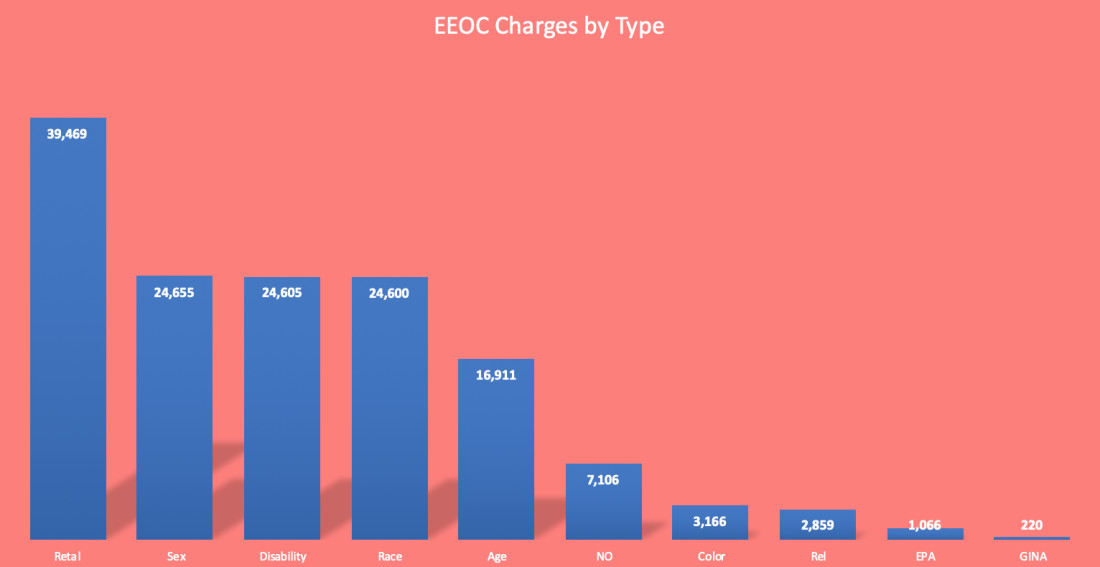 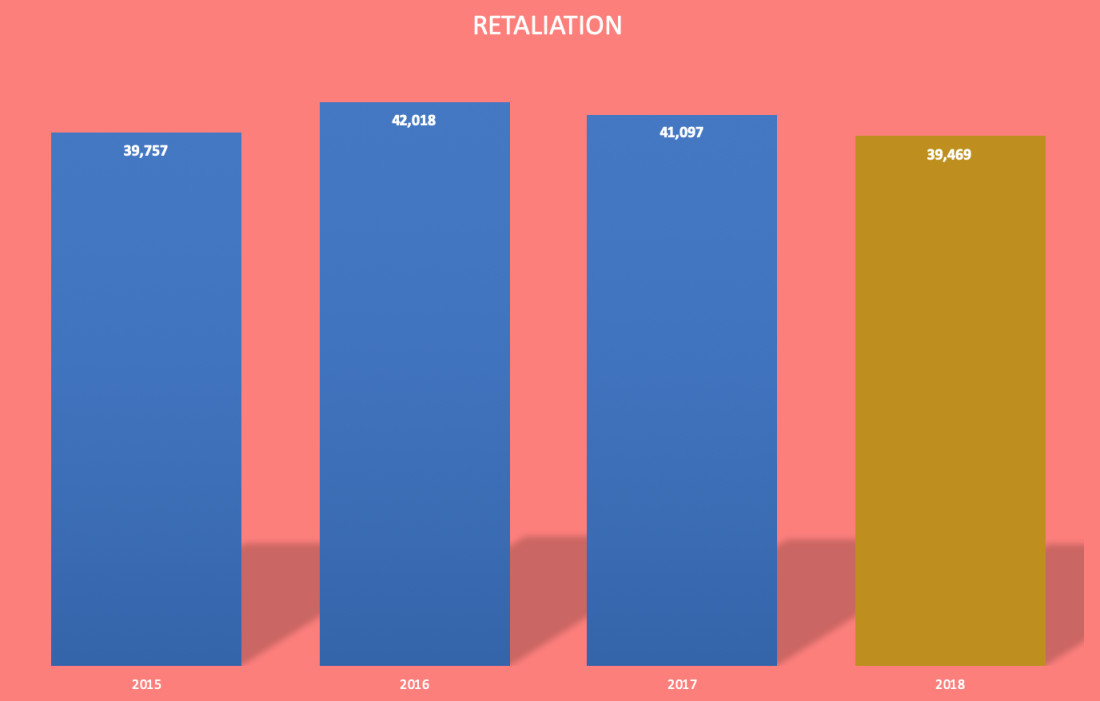 And here is sex discrimination (all types): 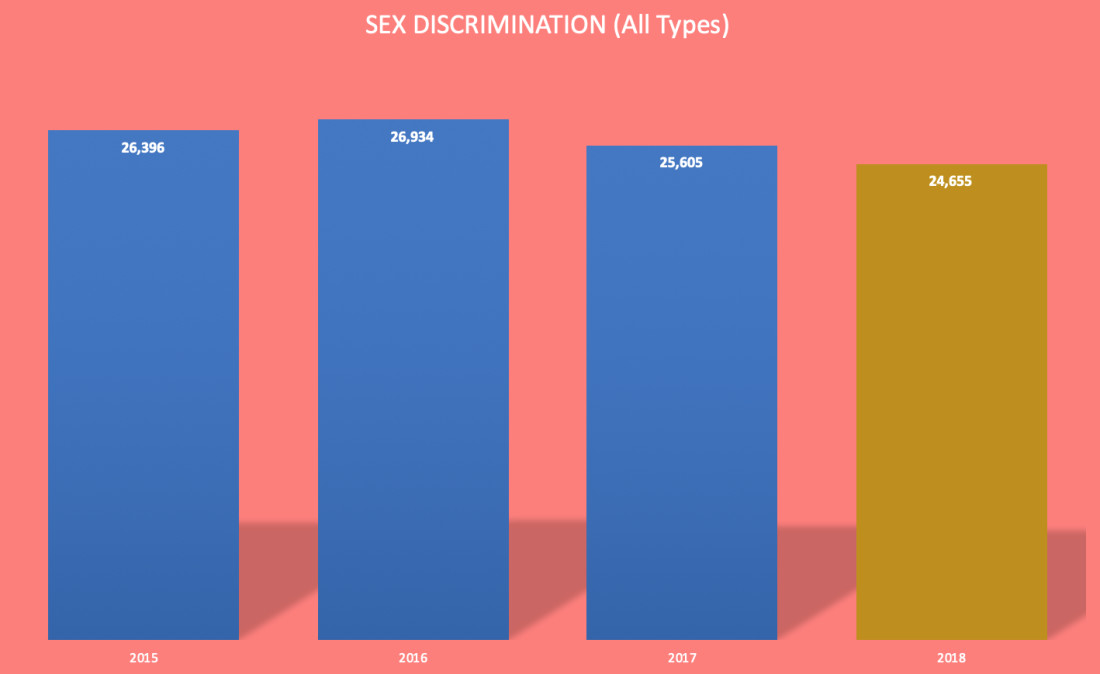 Disability discrimination charges also declined. Are employers getting better at fielding reasonable accommodation requests, now that they’ve had several years with the amended ADA? Maybe so. 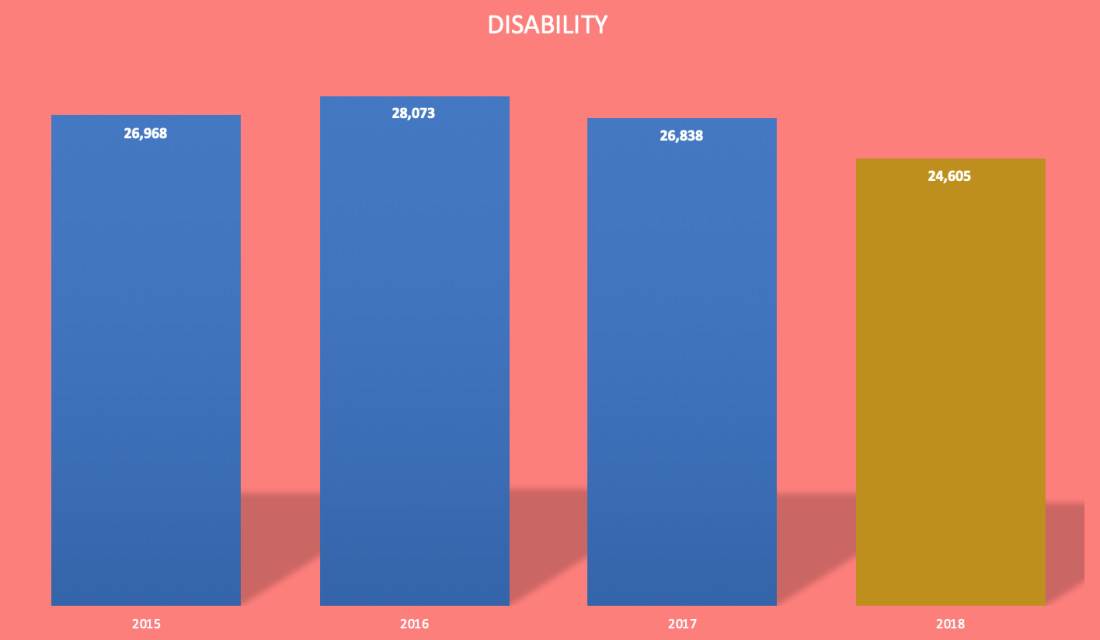 And look at the big drop in race discrimination charges. Does anyone have a theory as to why this would be the case? I don’t. 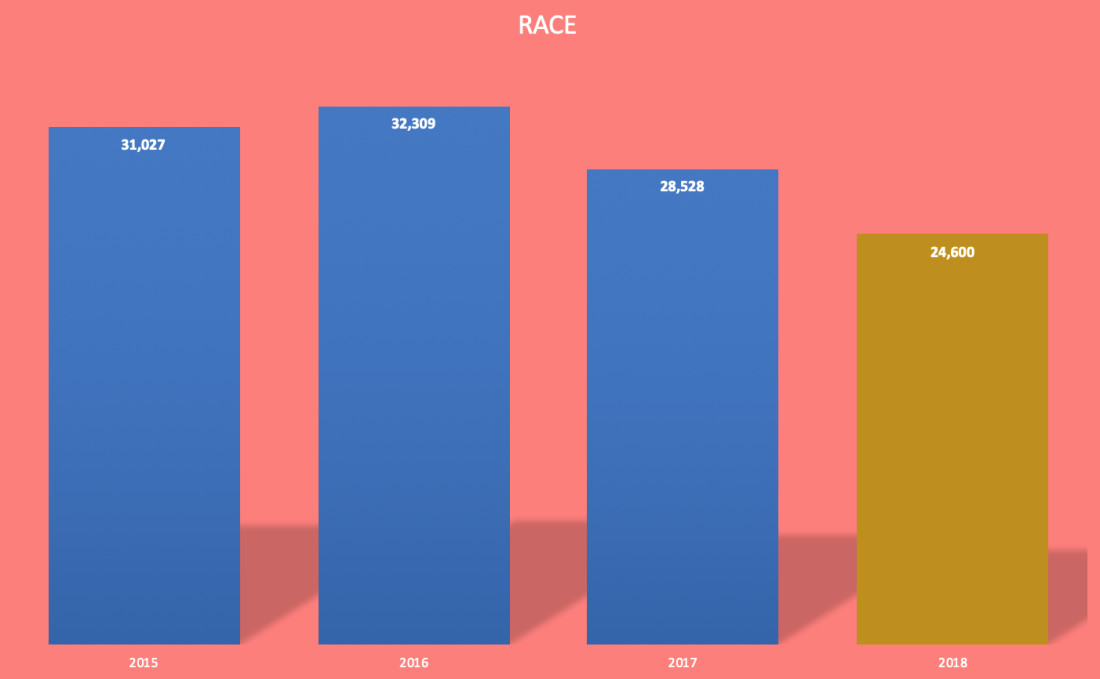 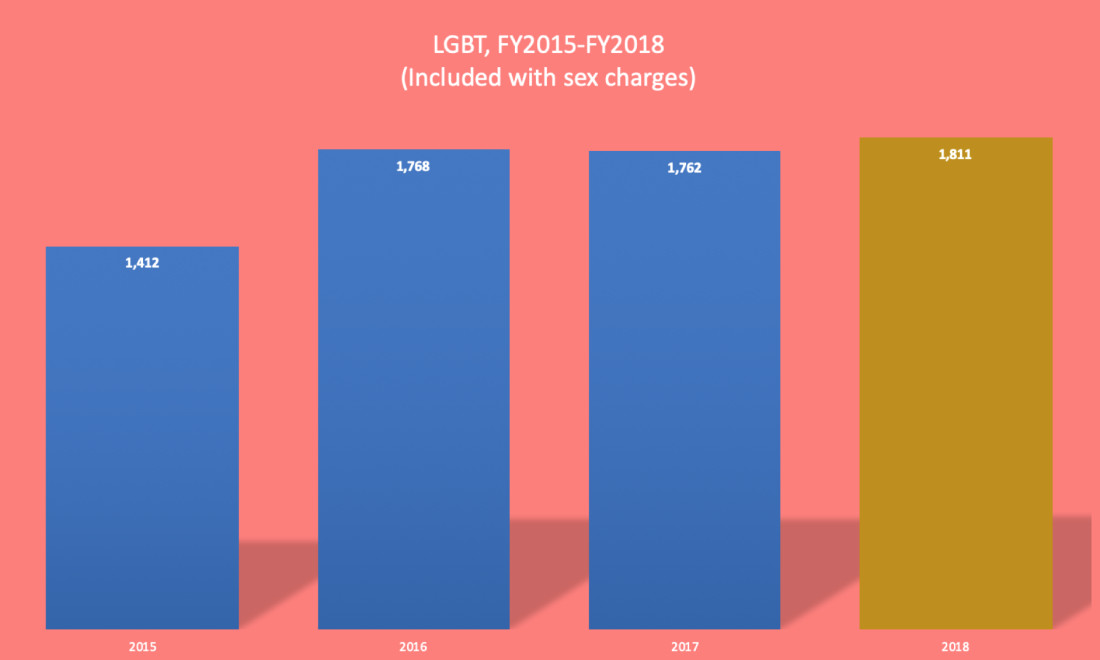 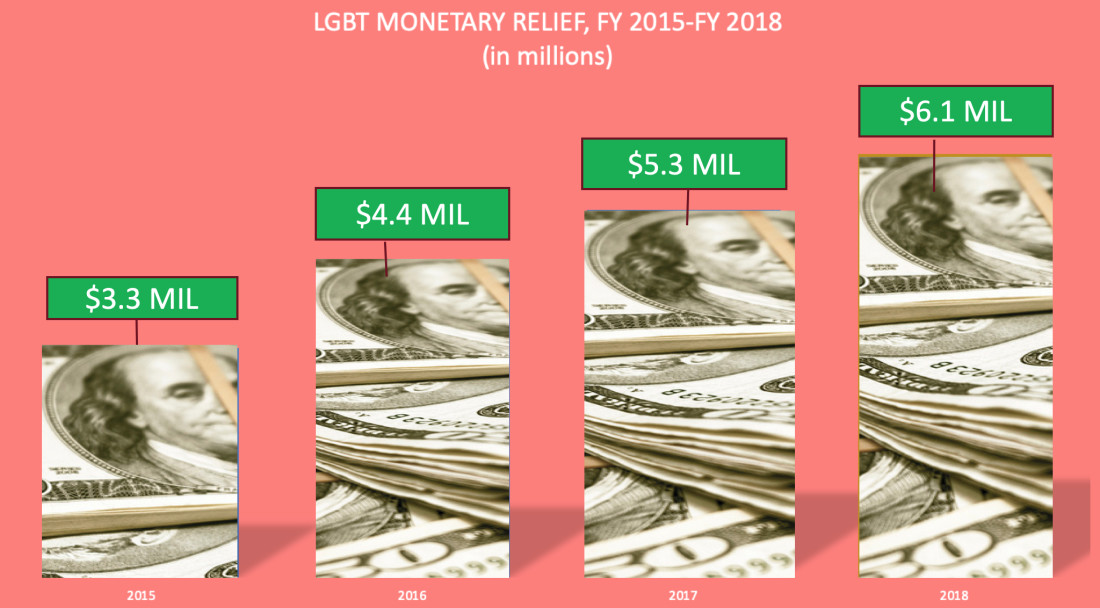 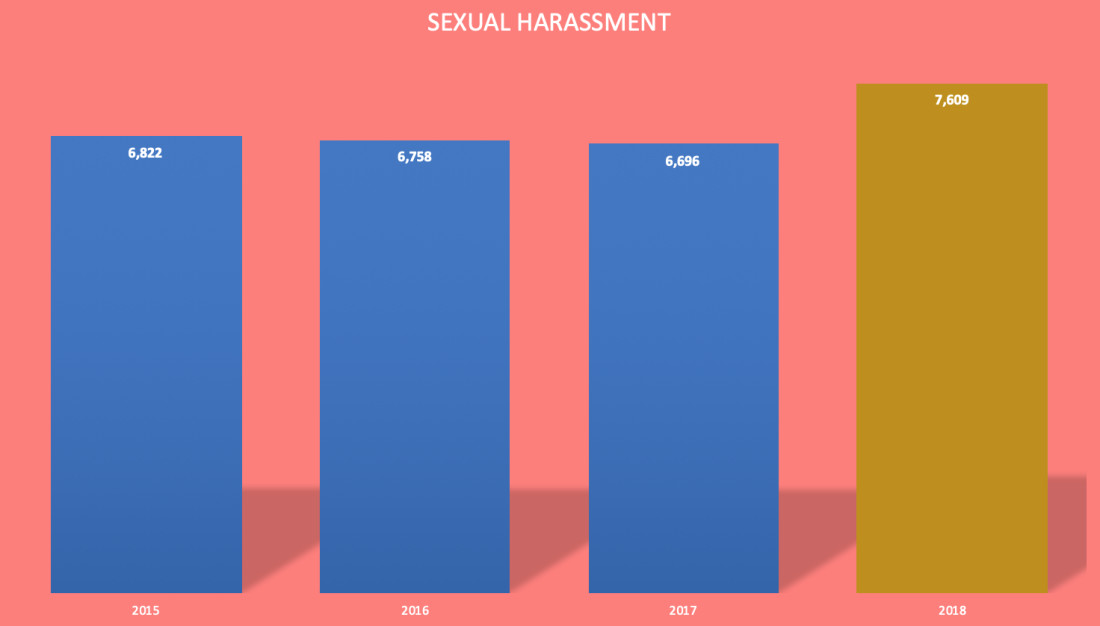 And the monetary relief obtained by the EEOC in sexual harassment cases increased dramatically, by more than 20 percent: 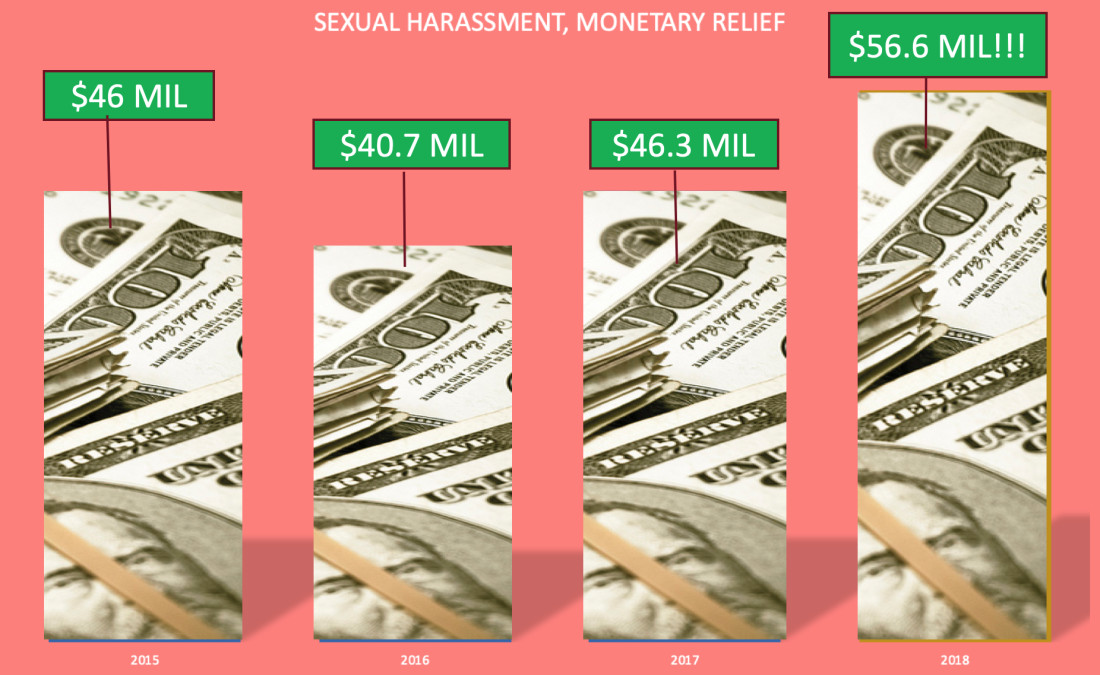 So, in FY 2018, sexual harassment was where the action was. But I am not sure that trend will continue. If you recall, the EEOC saw a slight decline in sexual harassment charges in FY 2017, presumably because the fiscal year ended right before #MeToo became hot.

My theory is that #MeToo may have already peaked. A Gallup poll conducted in February 2019indicated that a significant number of men and a smaller, but still significant, number of women were less likely to believe that sexual harassment in the workplace was a major problem, as compared with respondents who were polled in 2017.

Although the monetary relief obtained by the EEOC in sexual harassment cases was significant, I suspect that in FY 2018 many employers were scared to death of facing a sexual harassment charge or lawsuit, so they were receptive to settling those cases. I’m not sure we’d see that level of employer fear now. Here are a few reasons for my doubt:

Joe Biden: Thus far, apparently no one, male or female (no Democrat, anyway), is particularly concerned about his alleged “handsy” behavior.

Justin Fairfax: The Virginia Lieutenant Governor seems to be hanging in there.

Brett Kavanaugh: He persisted, and now he’s on the U.S. Supreme Court. Meanwhile, Michael Avenatti, who promoted some of the most outlandish allegations against Justice Kavanaugh, is facing a 36-count indictment (although not related to the Kavanaugh hearings).

Heck, while I’m at it, I’ll go all the way out to FY 2020. In FY 2020, I think we will have returned to pre-2018 levels, both with the number of sexual harassment charges filed and the monetary relief obtained.

Be sure to check back in 2020 so you can make fun of me for being wrong!