A fast-food restaurant fired a recently hired employee after its manager learned she was pregnant.

How do we know this was the manager’s reason for the termination? Because he textedit to the employee (which she later posted on Facebook). 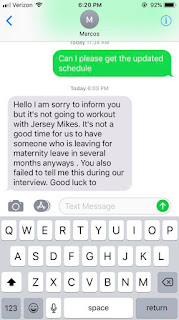 Hello, I’m sorry to inform you but it’s not going to workout with Jersey Mikes. It’s not a good time for us to have someone who is leaving for maternity leave in several months anyways . You also failed to tell me this during our interview. Good luck to [sic]

According to KIRO, the franchise owner offered the employee her job back (she refused), and the offending manager has since resigned.

A spokesperson a Jersey Mike’s corporate told Inc. that this termination “does not reflect our history or values,” and that “additional training is being provided.”

Excuse me, but how will training help ignorant managers avoid discrimination? Sex discrimination has been illegal since 1964, and pregnancy discrimination expressly since 1978. If a manager does not know that you can’t fire a woman because she’s pregnant, no amount of training in the world is going to help that manager not discriminate.

“We are going to institute more training” is the stock corporate answer to any workplace discrimination crisis. Don’t get me wrong, training is important and necessary. But training would not have resulted in this employee keeping her job. Lack of training of the manager was not the failing here. The failing was that the employee did not have a clear path to complain, other than taking her grievance pubic via Facebook.

Manager training may stop some discrimination, but it’s not a magic pill. Instead, train your employees on how to complain if they feel they are victims of discrimination, and train yourself to be open and receptive to such complaints, to fully investigate them, and to take appropriate corrective action. That’s how we root out discrimination.