Cynet Systems, an IT and engineering staffing company, had a viral mess on its hands over the weekend, after it posted a job that asked for candidates “Preferably Caucasian.”

Uh, hey @cynetjobs – what’s with this?

How could you POSSIBLY think that’s okay? 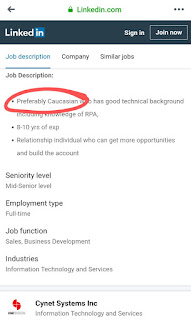 It took Cynet 44 hours(!) to respond, with this tweet:

Cynet apologizes for the anger & frustration caused by the offensive job post. It does not reflect our core values of inclusivity & equality. The individuals involved have been terminated. We will take this as a learning experience & will continue to serve our diverse community.

Its CEO, Nikhil (Nick) Budhiraja, initially tweeted that the job posting was a “terrible mistake,” and that the person responsible had been sent for retraining. Apparently, someone told him that the company needed to take a stronger stand against racism, because that tweet no longer exists, and “sent for retraining” is now “terminated.”

Secondly, you can prefer age, sex, religion, or national origin, but only if it’s a bona fideoccupational qualification for the position. To qualify as a BFOQ, a job qualification must relate to the essence, or to the central mission, of the employer’s business. A classic example of a BFOQ is safety-based mandatory retirement ages for airline pilots. Race or color, however, can never, ever be a BFOQ.

Thirdly, this is not a training problem. If your recruiters do not know that they cannot prefer White candidates, they should not be recruiting for you.

Finally, 44 hours is way too late to respond to a 2019 crisis. When a story goes viral, your company needs to get out in front of it immediately. As bad as this crisis is, Cynet made it that much worse by waiting almost two full days to publish its response. Cynet has now been labeled as a racist company. The offensive job posting certainly created that perception, but its 44-hour delay in responding let the story, and the perception it created, percolate and fester. Every hour you let a viral story go un-responded-to adds time exponentially to undo the harm, if it can ever be truly undone.

So, let this be a lesson to you and your business. Know who’s hiring for you,  know what they are posting, and do not wait to respond to bad press or bad social media.