The past two years have been busy for the Department of Labor’s Wage and Hour Division. One can directly track a large part of its busy workload to its enlargement of who qualifies as an “employer” under the Fair Labor Standards Act. In 2015, the DOL issued guidance re-defining, and broadening the definition of, who qualifies as an “independent contractor”. And, the following year, the DOL did the same with its definition of “joint employer”.

Alex Acosta, the newly appointed Secretary of Labor, looks to roll back the clock on these interpretations.
Yesterday, the DOL issued the following press release: 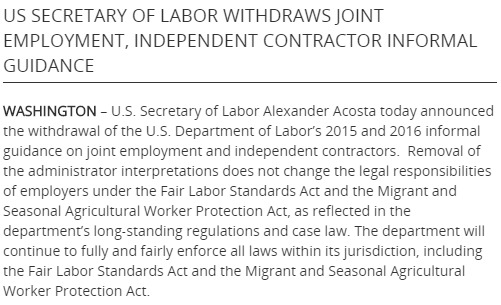 Short and to the point. Safe to assume that the DOL’s regulatory agenda on these crucial issues just changed for the better for employers.
So what now?
For starters, employers can expect other regulatory rollbacks. Obvious places to look? The NLRB (such as its own joint-employer standard and ambush election rules), OSHA (such as its more stringent injury reporting rules, tighter retaliation rules that include bans on post-accident drug testing, looser whistleblower guidance, and more liberal burden of proof in whistleblower cases), and the EEOC (dare we dream that it will yank its controversial criminal-history guidance).
More to the point the specific FLSA-related memos the DOL pulled, the agency will now shift its focus back to its pre-Obama standards for joint employment and independent contractor, which focused on the actual control the putative employer exercised over the employees of the actual employer. We should also see the DOL take a less aggressive enforcement stance when these issues may present themselves.